During my senior year in Honors English, we spoke upon a man who went to my school named Akeem Browder. Akeem Browder had a younger brother named Kalief Browder who committed suicide a year after being released. At the age of sixteen, Kalief Browder was accused of stealing a backpack which included a camera, $700 dollars, a credit card, and an iPod touch. Although the bail was set at $3,000 dollars, the Browder family couldn’t afford it which resulted in Kalief spending three years, with two years of solitary confinement, in Rikers Island. During the years of solitary confinement for 22-24 hours per day, the only thing Kalief Browder recognized like the back of his hand was the paces and seconds it took to get from one side of his cell to the other. The rest of the hours he spent outside his cell per day can be counted with one hand. During these hours, Kalief Browder was either physically abused by his inmates or the guards of Rikers Island 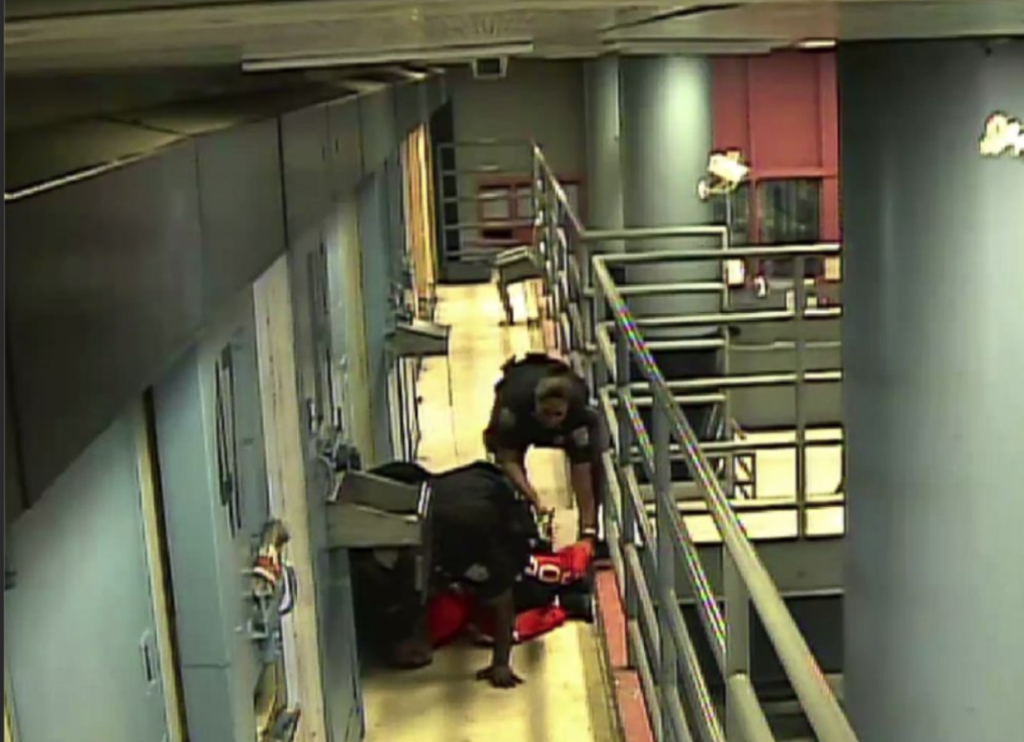 The image above is the harassment Kalief Browder has been through for 3+ years in solitary confinement. The minutes and small hours Kalief Browder has been given to walk from his cell to the court yards or to the cafeteria with his inmates, he was physically and mentally abused by not only the inmates but the guards within Rikers Island itself.

The other hours that he spent in solitary confinement was just mental and emotional abuse for 3+ years for Kalief. Once his trial was finally set, the prosecutor’s case lacked evidence to prove Kalief was the thief of the backpack. With years of mental, emotional, and physical abuse Kalief faced in solitary confinement, ABCNews said the following of Kalief: “But the psychological trauma from jail was haunting. Seven months after his interview with “Nightline,” Browder hung himself with an air conditional cord in his home in the Bronx. He was 22.” The United States is the only country in the world in which would place a life sentence upon a minor. The life sentence upon a minor is unjust and should be completely eradicated especially for minors who are still developing and growing. The structure of juvenile delinquent centers causes mental health problems within the youth inside these centers and creates a cycle of them embracing their punishment. Because there is no rehabilitation and instead there are full force punishments in these delinquent centers, the inmates will only know punishment and will continue to do bad.

Being in 22-24 hours of solitary confinement can make the inmate suffer from hallucinations and depression. For a child to be in solitary confinement is worse because they’re still developing their mind and if they are learning nothing, they will convert to nothing. Craig Haney, a professor of psychology in Santa Cruz, California explained how damaging solitary confinement is to minors because they are undergoing crucial stages of development socially, neurologically, and psychologically. “One of the reasons that solitary is particularly harmful to youth is that during adolescence, the brain undergoes major structural growth. Particularly important is the still-developing frontal lobe, the region of the brain responsible for cognitive processing such as planning, strategizing, and organizing thoughts or actions. One section of the frontal lobe, the dorsolateral prefrontal cortex, continues to develop into a person’s mid-20s. It is linked to the inhibition of impulses and the consideration of consequences.” If these young kids are sent to life in prison, it is basically killing them slowly because they aren’t going to learn anything and wouldn’t want change if they can’t show the public their change and their desire for a second chance or change.

There are no benefits towards solitary confinement within minors. In one study, Grassian found that more than a third of inmates are either psychotic or suicidal. If these inmates are only held for a span of 2-5 years, imagine minors that are held in solitary confinement for life. Just like Kalief Browder, there are many more minors that deal with the same mental and emotional trauma solitary confinement causes. Lindsay Hayes, another specialist in suicide prevention spoke upon how damaging it is for minors to be confined in their room. “The empirical research on youths in solitary confinement, although limited, has been disquieting. In a survey of 100 completed suicides in juvenile detention facilities, Lindsay Hayes found that 50 percent occurred at a time when the juveniles were confined to their rooms, with only 17 percent of the deceased on suicide precaution status at the time of their deaths.23 Similarly, a study of all acts of self-harm occurring in the New York City jail system between 2010 and 2012 found that assignment to solitary confinement and age less than 19 years were the two strongest correlates for such behavior.” If America believes that being in 6 feet by 8 feet prison cell will teach minors discipline, they’re wrong. Being inundated with the thoughts of what you did wrong for years or even for life is enough punishment, the confined solitary space just makes it worse which isn’t shocking at all when inmates are depressed, hallucinating, or trying to commit suicide.

The purpose of having juvenile delinquent centers is to have them away from the public. If these minors are away from the public or even from their family, it can cause further problems along the road. These minors are treated like animals in farms. They are only given a bed, sink, and a toilet while given food through a slot in a door. In order to see how detrimental solitary confinement is, Harry Harlow, a psychologist in the University of Wisconsin created a study and placed monkeys inside of a custom-designed solitary chamber. This chamber was named “the pit of despair” because of how impossible to get out which created further mental problems for the monkeys over time. Similarly, there were studies on human subjects in which they were placed in a similar chamber in order to experiment on their sensory deprivation overtime. This is how it went: “The plan was to observe students for six weeks, but not one lasted more than seven days. Nearly every student lost the ability ‘to think clearly about anything for any length of time,’ while several others began to suffer hallucinations.” If these graduate students, who are already have a complete developed mind suffered from hallucinations and lost the ability to think clearly in the span of a week, imagine these inmates who are younger than them and are sent to these same chambers for years. One jail complex that is known for being a hell hole is Rikers Island and how cruel and unwelcoming is not only their prisons, but the inmates and guards within it as well. 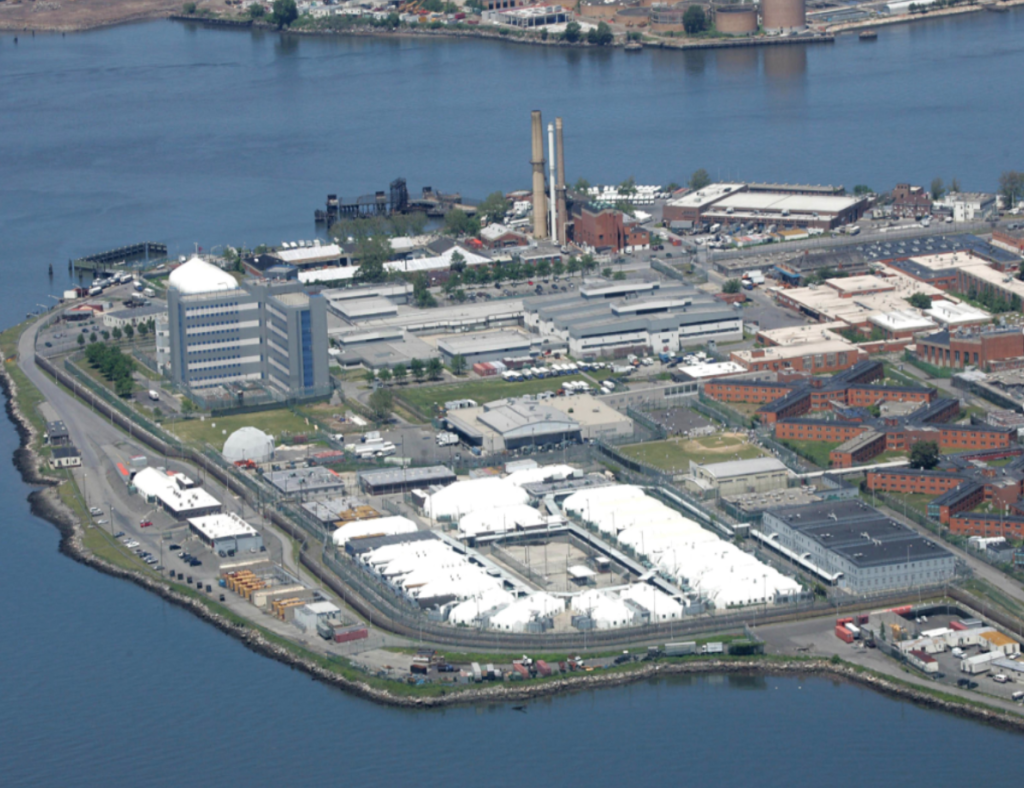 The picture above shows where Rikers Island is located whch shows not only how secluded Rikers Island looks but also all of the facilities surrounding the delinquent center that hold not only adults but minors awaiting trial.

Rikers Island, a main jail complex in New York City which sits between the Bronx and Queens, is mainly known for its brutality, corruption, pain, and injury inflicted upon the inmates who haven’t been convicted on committing a crime. Rikers Island was first used for raising pigs to slaughter to then be used as a landfill for horse manure and garbage. Because of how filthy it was, an infestation of a rat population commenced in which hasn’t been fixed until this day. Not only is it known for their cruel punishments, it is also known for how filthy it is as well. Robert Eaddy, a recent inmate got the chance to actually explain living conditions he faced during his time in Rikers Island. “When you’re in a cell by yourself, you don’t have to worry about sleeping next to someone who’s smelly. My cell was very small. I’d say about eight-by-eleven. You have a bed and a toilet. It was rat-infested. But it’s still better than being in the dorm, dealing with 59 other different body odors and sleeping problems.” Not only are they mentally abused and physically abused, they are in poor living conditions to which their health is in jeopardy. Rikers Island not only detain adults, but they also hold younger kids awaiting trial. During these months and years awaiting trial, these poor living conditions can affect their health more than adults do to adults having a stronger immune system than these kids.

Solitary confinement isn’t something that she be thought of first as an answer to minors breaking the law. There are many other countries that would rather rehabilitate the inmates rather than punish them because they see that punishment will only lead to the inmates being more hostile and committing the same crimes over and over again. Countries like India, Belgium, Poland, etc. put rehabilitation in front of punishment and they’ve noticed a significant change within the population of inmates and the percentage of people that are rearrested for a new crime. Every country has a different way of rehabilitating their inmates; for example, in India, they allow their prisoners for study free in India. “As of May 2015, more than 25,000 prisoners had participated in the program, earning everything from vocational certificates in baking or welding to master’s degrees in sociology. The university also works with inmates after their release to help them find employment.” These efforts to help prisoners will want them to continue to do good, shorten their sentence, and start a new life knowing that they’ll still have many job opportunities for themselves

Breslow, Jason M. “What Does Solitary Confinement Do To Your Mind?” PBS, Public Broadcasting Service, www.pbs.org/wgbh/frontline/article/what-does-solitary-confinement-do-to-your-mind/

This entry is licensed under a Creative Commons Attribution-NonCommercial-ShareAlike 4.0 International license.

Need help with the Commons? Visit our
help page Send us a message
Skip to toolbar

Built with WordPress Protected by Akismet Powered by CUNY